Attack of the Evil Plot Clones

This week I was Googling character names for my work in progress. I wanted to be sure I hadn’t inadvertently picked something I thought was cool and obscure, but in reality riddled half the titles on bestseller list. For me, it's the literary equivalent of checking popular baby names du jour so you can avoid saddling your kid with the next "Jacob" or "Isabella" moniker (with apologies to Jacobs and Isabellas everywhere).

To my slight dismay, I found my main character name used in another series of books. Since it was a completely different genre, and a supporting character at that, I chalked it up to a minor annoyance, but not a show stopper.

But then I sat up and took notice, realizing I'd uncovered bigger potatoes than the shared name.

As I read more, I realized this book shared some pretty significant plot elements with a manuscript I’d just finished beta reading for a friend. And when I say significant, I mean the core-premise-of-the-story significant. AND the book was in her genre. An evil plot clone!

When told her what I’d found, I got a reply that I won’t repeat here on the prime time Internet. Suffice it to say, it was in all caps.

Movie Review: Pirates of the Caribbean: On Stranger Tides 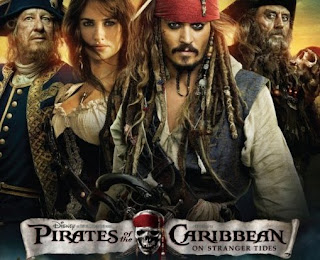 So apparently, POTC4 has been receiving a lot of hate and I’m not sure why. I suppose a lot of people were expecting this movie to wash out the bad taste that the last two movies left. Look, this movie isn’t going to redeem the franchise. I think they tried to make it the best they could. Could it be better? Sure, but that can be said about anything.

The story is a little disjointed, but it isn’t the bloated mess that was the last two movies. Things begin when Spanish fishermen discover a man (alive!) in their nets and he’s holding onto a map that leads to the fountain of youth. The Spaniards set out, thus kicking off the Fountain race. Unfortunately, it’s never disclosed on how that guy in the net managed to survive underwater for who knows how long, or where he came upon the map.

Jack Sparrow (Johnny Depp) is back, and no surprise, he’s caught in a bad place. He escapes the clutches of the British Monarch only to run into an imposter in a tavern. The imposter turns out to be a long lost love of his Angelica (Penélope Cruz). She has a ship. He doesn’t. So he joins up with her and her father, the voodoo pirate Blackbeard (Ian McShane) as they too search for the fountain of youth.

I’m going to butt heads with some of the criticism, such as the one saying this movie is preachy! Okay, just because there’s a cute clergyman (Sam Claflin) doesn’t mean this movie is trying to push Christian morals down your throat. Every time clergy boy got on his high horse, he was always knocked off by Blackbeard or Sparrow.

Everyone is weird! Jack doesn’t stand out! Well, everyone is a pirate, yes. Are they all weirdos? Eh, I’d say each has unique qualities, but Jack doesn’t get buried. You have Blackbeard who’s a badass mofo on one end, and then you have clergy boy and Angelica (to a lesser degree) on the other end. Jack treads in the middle, being selfish, but also showing a selfless side.

Also, there’s another theme to consider, in that all the characters are essentially true to themselves, despite trying to turn a new leaf or two. Blackbeard says “I’m a bad man,” and guess what? He is! He tries to care for Angelica as the one good thing in his life and – he can’t, he just can’t. Angelica lies in the beginning and, well, lies in the end. Remember Jack showing he could be selfless? Well – it doesn’t last. He may care for Angelica but he ain’t stupid. And Barbossa (Geoffrey Rush) is, and always will be, a pirate, no matter what hat he wears.

It’s too dark! Now this I agree with. There are some scenes, like the one beach scene before the vampiric mermaids’ attack, where all you can see are silhouettes. And mind you, I saw this in 2D. Apparently, no one took into account that people will be seeing this film in DARK movie theater. D’oh!

You know how movies have that extra little teaser scene after the credits? My advice: Skip it. I usually really enjoy these teaser scenes, like the one from THOR, but this one was wimpy and too short. You can easily wiki it to find out what it is.

So the bottom line is: If you love these characters and want to see more of Jack Sparrow and his zany adventures, then you’ll enjoy this film (I think). If you want something new, refreshing, with a twist of lemon, then go find something else. I mean, c’mon, it’s a franchise, what do you expect?

I give Pirates of the Caribbean: On Stranger Tides 3 out of 5 seafaring stars.
Posted by Unknown 2 comments:

Writing rule of thumb: Don’t parcel out your good ideas, saving them for the sequel. It takes more than one to make a good book.

Alastair Reynolds must have listened, because his novel, Revelation Space, is packed with great ideas.

When a 26th-century dig turns up clues about a dead alien civilization on a distant world, archeologist Dan Sylveste will stop at nothing to discover who -- or what -- caused “The Event” that wiped them out. But as determined as Sylveste is to find answers to the mystery of the extinct Amarantin, others are just as determined to find him. Among them, the crew of the city-sized interstellar ship, Nostalgia for Infinity, who need Sylveste to cure their captain of the nano-plague which is slowly consuming both him and their ship. And among them -- assassin Ana Khouri, contracted by the mysterious Madamoiselle, who has her own interest in Sylveste – namely seeing him dead.

Across multiple worlds and decades, these factions pursue their own ends only to find themselves mere pawns in a millennias-old struggle between ancient intellegences. And of course, this is a struggle that will determine the survival of life in the galaxy.

Review: THE NAME OF THE WIND by Patrick Rothfuss

“As names have power, words have power. Words can light fires in the minds of men.”

-Patrick Rothfuss (The Name of the Wind)

So stipulated, at almost 700 pages, Rothfuss’s debut novel, The Name of the Wind, should have enough words to stoke a mental inferno.

But even for all its hype and commercial success, I'd have gotten more spark from an empty Bic.

For a book its publisher claimed was the best fantasy manuscript they’d seen in thirty years – likening it to George R.R. Martin and Tad Williams – this book tips the scales with too many elements that are just average or awkward.

The story revolves around Kvothe, who we find as an unassuming innkeeper in a backwater village as the tale begins. But when a travelling scribe named Chronicler comes into town, we learn Kvothe is something of a legendary figure – one whose influence has somehow affected the world for good and for ill. At the scribe’s request, Kvothe reluctantly agrees to recite the story of his life for Chronicler to…well…chronicle.

Email ThisBlogThis!Share to TwitterShare to FacebookShare to Pinterest
Labels: book review, fantasy, Kerry
Older Posts Home
Subscribe to: Posts (Atom)
"Is there any person in the world who does not dream? Who doesn't contain within them worlds unimagined?"
-- Neil Gaiman